Following on from my last post on implementing AWS Backup, we have started to run it in production with a few instances after successful tests of backup and restores in a development environment. Some of the volumes that were being backed up did not have any name tags which made identifying the snapshots created by AWS backup time consuming (volumes should be tagged when the provisioning tasks are run but there were quite a few old instances in the account that had volumes attached with no name tag). I created a lambda using PowerShell Core (Windows PowerShell is not supported) to tag all the volumes in the account that are attached to an EC2 instance to make sure all volumes have a name. The lambda can be run periodically just in case an instance is created and the volume does not have a name tag applied.

This lambda was created on a Mac using PowerShell core and the AWSCore and AWSLambda modules:

Full code can be found in my PowerShell Github repo. See the AWS post on Setting up a PowerShell Development Environment.

Below is the complete code for the lambda,

The #requires statement is needed for any modules that will be used by the lambda. For this one it is just the AWS module, but you can include any modules that are PowerShell core compatible.

The lambda needs to the ability to be able to tag the volumes.

A policy is created with the permission to apply tags.

With the two policies, a role can be created for the lambda to use that will allow it to tag EC2 resources and also log what actions have taken place. The code below uses Get-Content and the two json files above to create the policy and role in the AWS account (the account running the commands but have permission to create IAM policies and roles).

After running the command the directory structure looks like: 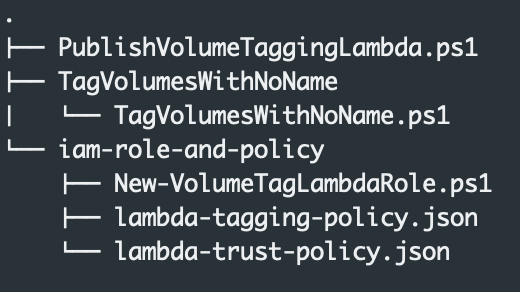 The lambda code should be placed in the TagVolumesWithNoName/TagVolumesWithNoName.ps1 script. This file has comments and template code when created and the readme.txt has more information and can be deleted once it has been read.

As the lambda is published, you will be prompted to select an iam role. Enter the number of the IAM role that was created above. 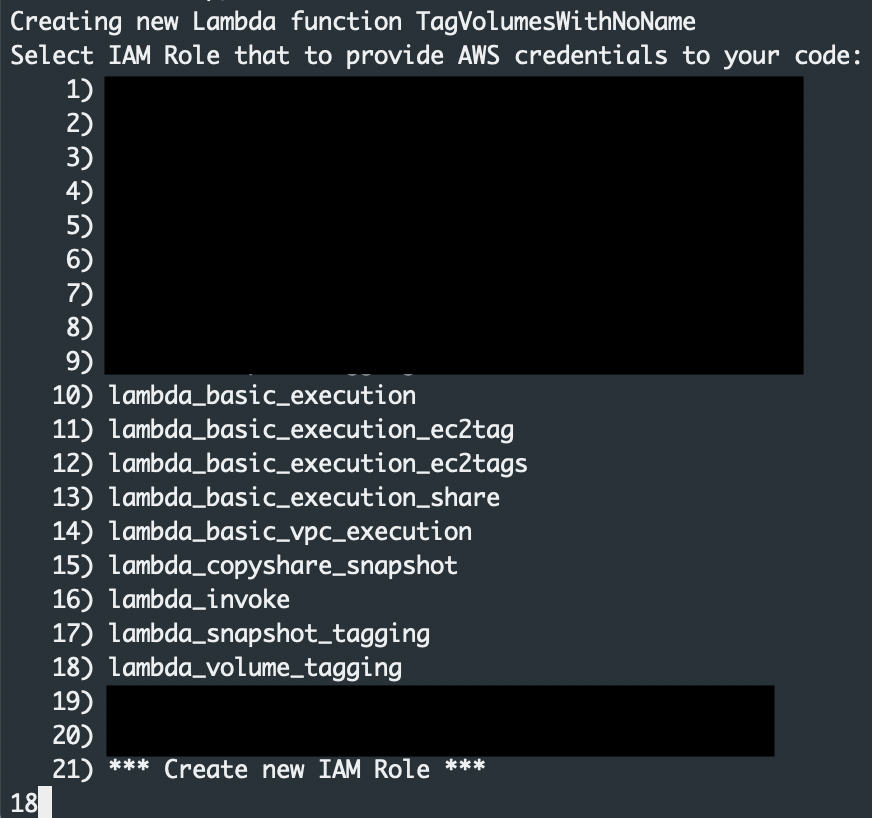 I did run into errors publishing a couple of times and had to restart my PowerShell Core session and try again.

Once the lambda has been published, you will see it in the AWS console.

Select the lambda that has been published from the lambda section in the AWS console.

To test the lambda from the console:

After the lambda ran, the volume was tagged with the instance name.

Volumes should be tagged appropriately on provisioning of an EC2 instance, however sometimes they are not and currently to name the root ebs volume using cloudformation, requires a hacky workaround. Using PowerShell core running on a lambda is a good option to make sure volumes are tagged with a name tag which can be created as from the attached instance. This makes managing volumes easier and also helps identify snapshot that are created from these volumes. This lambda could be run on a schedule or started on another event from cloudwatch event.