I’ve just completed a task to restart a Windows service when splunk detects that is not running on a Windows server. Once the service is detected as not running, splunk sends an https POST with a JSON payload to an Azure Automation runbook webhook. This post shows how to get the data from a JSON payload and is the platform of how I built the script to start the service from the data sent from splunk.

As it’s been a while since I have used Azure automation and runbooks, and after being inspired by recently watching this channel 9 video to complete the task with PowerShell (something I had done previously but not for ages), I’ve decided to write it up here.

Install the AzureRM PowerShell module if it is not already on the system.

Connect to Azure and select the correct subscription (if you have more than one).

The runbook takes one parameter, which is an object with the name WebhookData. This object has the following properties from the POST request:

(From the Microsoft docs on Automation)

The if block on line 12 is needed for testing if you were to use the Azure portal’s test pane (shown later). A real webhook received will contain data in the $Webhook.RequestBody, however this isn’t the case from the test pane so this logic is required for testing data passed from there.

The data is converted from JSON to a PowerShell object and the properties in the RequestBody property is saved to another variable for output.

The service name and host name are outputted from the script.

For the purposes of this post, I’m going to create a brand new Resource Group and Automation Account. I’ve broken the script up so I can include screenshots but this should all be ran in the same PowerShell session where the variables are declared and the authentication is done with Azure. 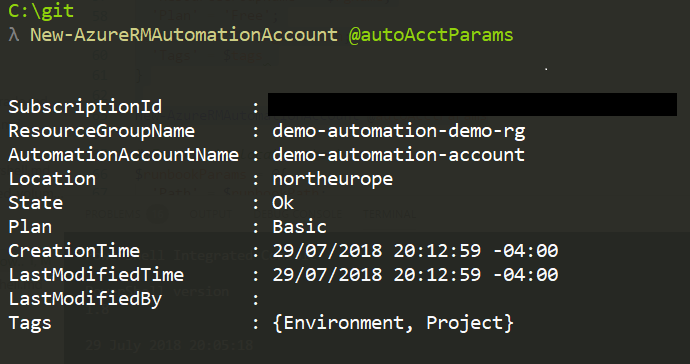 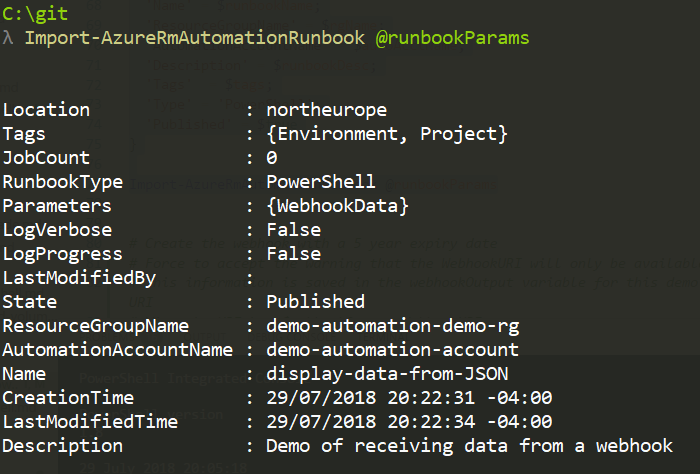 The URI returned from the following command contains the security token. It is displayed only once and can’t be retrieved at a later time. In production you would save this URI in a safe location such as an encrypted password manager. For this demo I am storing it in the webhookOutput variable but it would be lost as soon as the session is closed or the variables are cleared. Make a note of it if you need it in the future otherwise you will have to recreate the webhook.

Testing from the portal

You can do all of this manually from the portal if you like (the portal interacts with the same AzureRM APIs as PowerShell does behind the scenes).

I’m not going to go through setting up the resource group, automation account, uploading the runbook and creating the webhook (if you upload the runbook, make sure you publish it otherwise you won’t be able to create the webhook) but will show how to run the test.

In the test panel, enter the JSON data 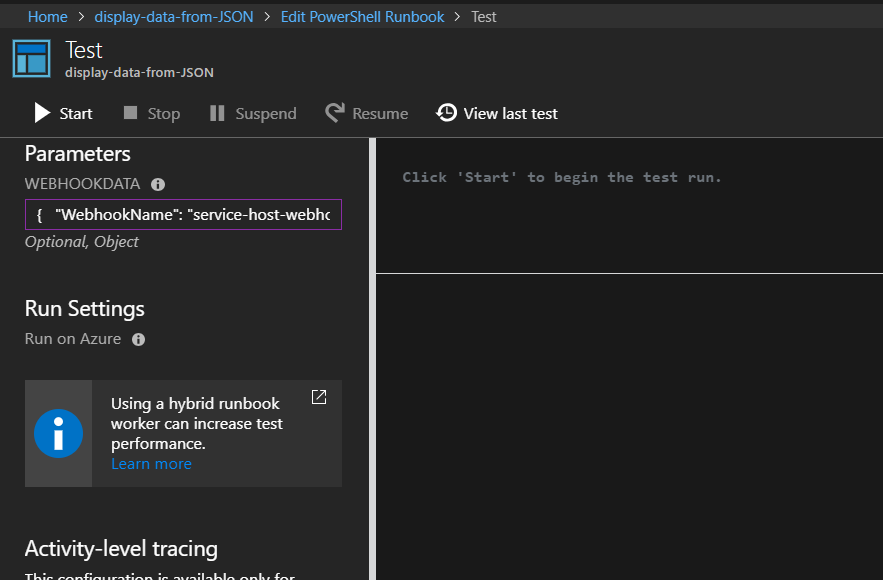 The request will be queued up and the results will be displayed in the test pane.

You will see the Write-Output value from within the if block because there is not a value in $WebhookData.Request property.

All that is left to do is clean up.