I’ve completed a number of the tracks and I’m currently working through the Local Development and Testing track and although inspec was cool, I’d much prefer to run integration tests with Pester, the PowerShell testing framework (which I’m also learning and incorporating it as much as possible).

It took me a bit of time and googling to get this up and running but it’s easy once you know how, so here’s an overview. You’ll need:

Now create the Pester tests under the directory structure: cookbook/test/integration/recipeName/pester

For example, a recipe called uk_settings, create a Pester test file like so: team_city_agent/test/integration/uk_settings/pester/uk_settings.Tests.ps1 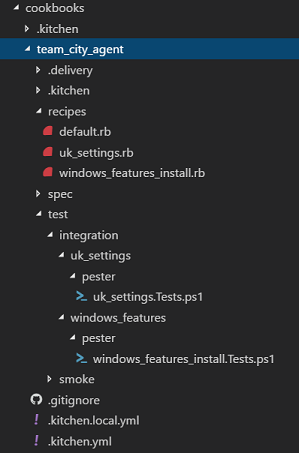 Now when you run kitchen verify, your Pester tests will run for the integration tests.

I’m enjoying learning chef and am glad I can use Pester tests within the chef framework to test the infrastructure created.

For reference, the following versions are being used on my Windows 10 machine. I also got this set up easily on my mac at work after I had added the chef install of ruby to my bash_profile (which it tells you to do in the setup but I had originally missed that step and was using the system installed version which was too old to install kitchen-pester).